Brenda Victoria Castillo, President & CEO of the National Hispanic Media Coalition (NHMC) is pleased to announce that the civil rights organization, founded 35 years ago, has elected four new board officers during its recent annual board meeting. “These new board officers bring a wealth of knowledge in fundraising, entertainment, law, and leadership,” said Castillo.

NHMC is a nonprofit social justice organization that was founded to eliminate hate, discrimination, and racism toward the Latino community.

“I am honored to be elected as the new board chair and I look forward to working with my fellow board colleagues to help usher NHMC’s mission forward at such a historic time in our country,” said Richard Cordova, NHMC Board Chair. 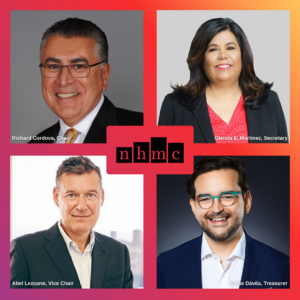 The newly elected Board Officers include:

Richard Cordova is the former President and CEO of Children’s Hospital Los Angeles, one of the nation’s leading children’s hospitals and internationally renowned for its leadership in pediatrics.  He ran the effort for the hospital’s first $1 billion fundraising campaign. After ten years of  service he retired from CHLA in August 2015. He is now spending his time on various fiduciary and advisory Boards. Cordova was selected one of America’s “Top 100 Most Influential Hispanics” by Hispanic Business  magazine in 2005; and he was also selected  “CEO of the Year” by the Los Angeles Business Journal in 2011.

Glenda Martinez is Assistant General Counsel at Fox Rothschild LLC where she provides risk management advice to the firm’s national network of offices.  Prior to joining Fox Rothschild, Glenda was a principal in the Law Office of Glenda Martinez where she provided general counsel services to entertainment companies.  Before that, the Senior Vice President and Associate General counsel and serving as the head of Univision’s Legal Department’s Los Angeles Office. She is a member of the Mexican American Bar Association and the Hispanic National Bar Association. Glenda graduated from Yale University, cum laude, and earned her Juris Doctor from Harvard Law School.

Jaime Dávila is the President & Co-Founder of Campanario Entertainment. He is a leader among the generation of producers dedicated to creating more authentic and inclusive content through a Latinx lens.  Dávila’s slate includes the popular Netflix original, Selena: The Series, which celebrates and tells the life of Mexican American singer and icon Selena Quintanilla. To date, the series has been viewed in 25 million households and has reached the Netflix top 10 in over 23 countries. Dávila holds a Bachelor of Arts degree from Harvard and a Master of Science in Latin American Studies from the University of Oxford.

NHMC is a 35 year old nonprofit 501(c)(3) civil rights organization that was founded to eliminate hate, discrimination, and racism towards the Latino community. We educate and increase visibility of Latinx from our policy work in Washington D.C. to our media advocacy work in Hollywood where we collaborate, create, and connect Latinx talent with the entertainment industry. At NHMC we focus on all forms of media because it is one of the most influential and powerful institutions that exist. The media can have important effects on the attitudes, values, and beliefs of society. NHMC collaborates with other social justice organizations to eliminate online hate and hold online platforms accountable for their content. We advocate for the Lifeline Program, Net Neutrality protections, and also work in closing the digital divide for Latino and other marginalized communities. NHMC works in partnership with other civil rights organizations to safeguard democracy in the United States of America.