PASADENA, Calif. – On Tuesday, February 11, the National Hispanic Media Coalition was honored by the University of Southern California (USC) Latino Alumni Association at itssecond Alumni Spotlight reception that honors the achievements of Latino alumni of the university. The association presented NHMC with the inaugural Special Recognition for Advocacy award. “NHMC is honored to be recognized by the USC Latino Alumni Association for our years of work on behalf of Latinos in media and telecommunications,” said NHMC President & CEO Alex Nogales. “Every day, NHMC works to make this country a better place for all Americans by making the media more inclusive of the Latino community.” “It is important to recognize not only how far we’ve come, but how far we have to go to ensure we are fairly and accurately portrayed in media,” added NHMC Vice President of Operations Brenda Rivas, who is also a USC alum. “We thank our national partners and supporters throughout the country for their invaluable role in accomplishing important victories to achieve full inclusion for the Latino community.” To see the tribute video presented at the USC Latino Alumni Association’s reception, click here.  For additional photographs of the event, click here. [caption id="" align="alignright" width="300"] 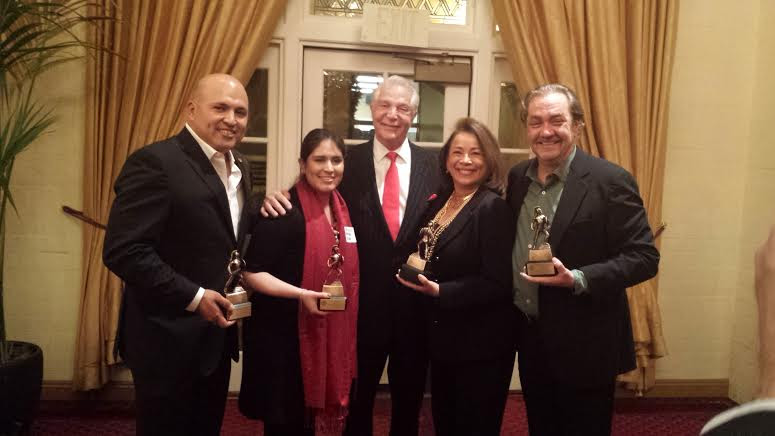 Raul Rodriguez, NHMC VP of Operations Brenda Rivas, NHMC President & CEO Alex Nogales, Alma Martinez, and Santiago Pozo[/caption] The USC Latino Alumni Association alsohonored alumni Alma Martínez, actor, scholar and activist; Santiago Pozo, CEO of Arenas Group; and Raul Rodriguez, Vice President and General Manager of Univision San Francisco Bay Area. Founded in 1986 in Los Angeles to address misrepresentation and omission of Latinos in media, NHMC boasts a successful track record of advocating for a more responsible and inclusive media system and affordable communications services for all. NHMC’s advocacy ranges from picketing outside of irresponsible media outlets, to testifying before Congress, to filing petitions to deny telecommunications mergers with the Federal Communications Commission (FCC). NHMC co-founder and current President & CEO Alex Nogales, a multiple Emmy-Award winning producer, leverages his deep connections with top-level executives at entertainment, media and telecommunications firms to persuade them to do the right thing or risk being targeted by NHMC’s campaigns. Two NHMC lawyers execute legal and policy strategies; and other staff members coordinate professional development programs to infuse more Latinos into the entertainment industry. At the annual NHMC Impact Awards Gala, Latino A-listers and other Hollywood influentials come together to celebrate outstanding contributions to the positive portrayal of Latinos in media. Some of NHMC’s proudest achievements include: With its small staff, NHMC understands the power of coalition work, and much of its advocacy happens with allies in the civil rights, immigration and media reform fields. It actively participates in the National Latino Media Council (NLMC), the Leadership Conference on Civil and Human Rights, the National Hispanic Leadership Agenda (NHLA) and the Anti-Hate in the Immigration Debate Table. NHMC is headquartered in Pasadena, California and it has an office in Washington, D.C. Its board members are scattered throughout the country.
###
About NHMC The National Hispanic Media Coalition is a non-partisan, non-profit, media advocacy and civil rights organization established in 1986 in Los Angeles, California. Its mission is to educate and influence media corporations on the importance of including U.S. Latinos at all levels of employment. It augments the pool of Latino talent with its professional development programs. It challenges media that carelessly exploit negative Latino stereotypes. It scrutinizes and opines on media and telecommunications policy issues. Learn more at www.nhmc.org. Receive real-time updates on Facebook and Twitter @NHMC.
]]>