We have known the truth, now Facebook has been exposed!

Facebook putting profit over hate, safety, and human life is not a surprise to the National Hispanic Media Coalition (NHMC) who has been challenging social media companies for more than a decade on platform accountability.

Facebook continues to profit from the hate directed towards Latinos and Spanish speaking communities. Their continued negligence to protect Latinx, marginalized communities, and the democracy of the United States of America is disgraceful, anti-American, and anti-democratic.

NHMC’s work on the “Stop Hate for Profit” campaign, “Ya Basta, Facebook” campaign, Change the Terms Coalition, and leading the Spanish Language Disinformation Coalition has put pressure on Facebook. However, we need the public to put pressure on our government to regulate now. Lives are at stake!

With your help, NHMC will continue the fight for social justice, protecting  consumers, and demanding platform accountability.

Yours in the Movement, 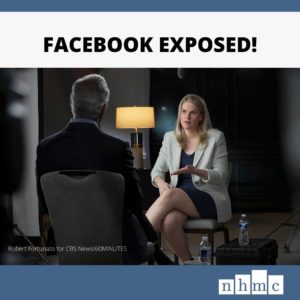