It’s utterly crucial that during National Hispanic Heritage Month, trans and non-binary voices and bodies be included and highlighted amongst the Hispanic/Latinx artists, activists, cultural trailblazers, and essential figures celebrated in 2021.

Far too often, LGBTQIA members of our communities are silenced and experience erasure due to a dangerous machismo climate that contributes to transphobia and, ultimately, violence. There is a real danger faced by LGBTQIA Hispanics/Latines daily. We need to curb the trans/non-binary assaults, homicide, and suicide rates in our cities.

There continues to be a stigma with being LGBTQ in our Hispanic/Latine communities for so many reasons. This also contributes to Hispanic/Latinx trans visibility being limited to white trans celebrities. There is a lack of understanding perpetuating dangerous myths of our Hispanic trans/non-binary members. We need to shine a light on Ser Anzoategui to make space for LGBTQIA representation that is systemically erased, invisible, and as a result, is left in the dark.

Ser’s recent Instagram post shares more about their recent change in their gender journey. Ser is the first non-binary/trans-Latine actor to be recognized in the Supporting Actor category amongst their all-male nominated peers for the 2019 and 2021 Imagen Awards for their performance of Eddy in the Starz comedy series Vida. This year, the Imagen Foundation hit another milestone, increasing to 350 submissions for consideration, a record since last year.

The Imagen Awards will be presented exclusively on kcet.org and pbssocal.org Sunday, October 10, at 5 PM Pacific/8 PM Eastern.

From That’s What They Said Productions 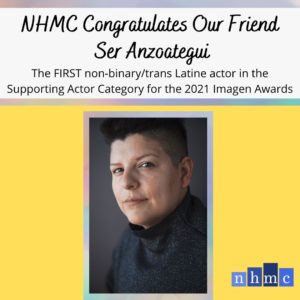